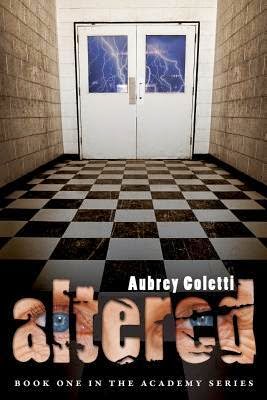 
When Toni, Joseph and Charlie arrive at their new boarding school, they are glad to leave their families - and respective problems - behind. Isolated as boarders, they meet a handsome senior with a personality like iced snake's blood, teachers with a penchant for physical punishment, and four other outcasts who reveal that their being brought to the Academy wasn't random at all. When the arrivals discover that their new school is engaged in "behavior modification" through electric shocks, isolation, restraints, and an ever-evolving set of methods to "fix" them, they declare war on their Academy. During their campaign of sabotage, they fight, hate, scorn, love, and begin to uncover the reasons why they were brought to the school. But as their war against the school escalates beyond their control, will they become the very things the Academy believes they are: dangerous, delinquent - and mad?(

Ok WTH did I just read?? No NO I mean that in a good way. This book?!!! Yeah it's both scary and just down right unsettling.  I've read the other reviews where people say it's nurture vs nature. Nope it's simple "every action has a equal and opposite reaction" yeah I went there.

This book was complex, confusing in the beginning because of the amount of characters being introduced and amusing. I laughed because so many of the characters were witty as heck and under appreciated for it.  As the story progressed the development of characters helped to push the story along.  There is a lot of dialogue but this only makes the story better.

I'm still trying to collect my thoughts, for such a small book, it sucked me in, had me yelling at the characters, cussing people out, laughing, whispering "I wish a person would try me.." and sympathizing with both sides because you see each had their valid points.  This book however was excedingly uncomfortable for me as a black woman, because of the things some of the scenarios talked about, the rooms in the school and the concept that people thought it was ok, because well these kids are delinquents and social outcasts anyway.  It's was great read for the social experiment aspect, how far would you go when pushed??

The school and the teachers made me uncomfortable as heck, reading the kids reactions to the rules, was real, raw and totally believeable. Heck I'm a grown woman and I was chaffing at some of the rules and their circular explanations as to why the rules really worked. Like No, that's not how it's going to work today. LOL

I have the second book and I'm already flying through it because I want to know how the students are handling their revenge backfiring, how the teachers are reacting to their loss of control, and finding out what really goes on here at this school. And who really thought all of this could work??  Where are the students who graduated?? Why is no one really aware of what happens here??  God there are so many questions!!! I'm going to go find out.

I recommend you check it out for yourself as well my loves, I'll have my review for the second book tomorrow and the author is guest posting after that so be on the look out!!