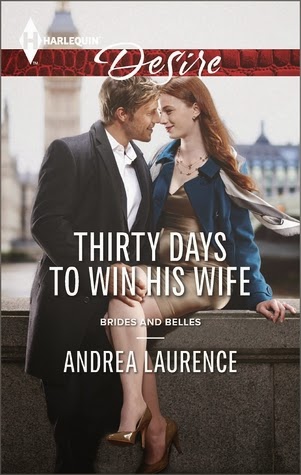 
Even with a baby on the way, Amelia's holding out for the perfect husband. Tyler has thirty days to prove he's the one. Best friends Tyler Dixon and Amelia Kennedy eloped to Vegas on a whim. But before they can deal with their quickie divorce, she confesses: she's pregnant. Now there's no way Tyler will agree to go their separate ways. He wants them to stay married, raise their child together, share a house—and a bed. Yet Amelia has always dreamed of a perfect marriage…and she doesn't think this self-made millionaire is lifetime material despite their friendship. She's given him just one month to prove her wrong…

Originally Reviewed on The Bewitching Bibliophile

I went into this with no memory of the synopsis, because that's really how I love to read my books. As a smaller  book it went pretty quickly, however I found that I wasn't as engaged as I normally am. It's very rare for me not to love one of these but there were just too many moments that weren't fleshed out enough for me so I found it to be an okay read, it ended just a little too smoothly for me.

It was a cute story but I didn't feel like they had real chemistry between them.  There was a lot of potential but it just didn't quite make it. Part of the reason it didn't work for me was the female protagonist was too childish as I was reading the book.  She whined way too much, who doesn't wan ta  partner who wants to work at your relationship??  Just about every step the male character made wasn't right for her, she had this idea in her head of her perfect relationship and she wasn't willing to see the real perfection in front of her instead of the one she created in her head. No matter what he did he did it wrong. Even if it was exactly what she wanted. I just wanted to kick her. Like you ungrateful girl.   Kelly what part of not everybody needs to know doesn't she understand.  Do you not know about the old adage to keep it yourself until you're past the stage of a problem happening??   She got annoying fast  because for someone intent on having kids she did no research, bought no books, nothing where as he went shopping and thought things through.  Kelly he's not your dad so stop being stupid.

The characters have a few tough moments in their relationship, including one that can break most relationships and yet it wasn't quite fleshed out, it just brushed over it for a few paragraphs.  It didn't do the justice it needed and didn't give it enough of chance to bring them together.

I never really felt like the male character was really in it at first, it really felt like he was going for the challenge as she accused him of. But then at the same time she kept doubting him so much I felt like he deserved more from her considering he's one of her best friends. I just couldn't get why she didn't trust that he knew her so well.  He accepted the changes in his life really quickly and I wanted some conflict from him, even if it was just him taking a day or two to process then coming back. It was like this wasn't planned so why aren't you freaking out??

The ending was kinda rushed and felt like it was just to wrap it up.  As I said I really didn't feel the chemistry between the characters, so this isn't a happy read for me.

Have you read it?? Let me know what you thought in the comments down below