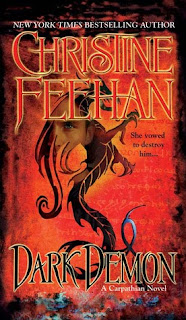 
Christine Feehan has worked magic on a legion of fans with her darkly thrilling Carpathian tales. Now she delivers the provocative story of a female vampire slayer who proves as seductive--and mysterious--as the night dwellers she stalks... For as long as she can remember, Natalya has been fighting demons: first in the form of childhood nightmares, then later, immortal creatures that kill and prey on the innocent--including her own twin brother. Whether Carpathian or vampire, she slays those who murder by night, and has no equal--until she is seduced by the ve thing she considers her enemy... A Carpathian who has seen nearly everything in his endless existence, Vikirnoff doesn't think he can be surprised anymore--until he faces a woman who rival him as a vampire hunter. A formidable and gifted warrior in her own right, Natalya has a nature that is strange familiar--yet alien--to his own. Who is this mysterious female who fears no one--not even him? Natalya could the key to the survival of the Carpathians, but a Vikirnoff is certain of is that she is the key to his hear and soul...

This is one of the bigger books in the series and perhaps that was why I was hesitant to read it.  But then when I couldn't find it in me to read one more contemporary I realized that I was in the perfect mood to read it.  I blew through this one really quickly.  I both loved this one and had issues as well. The idea that she's so unique when we know that there are other women who hunt??  Yeah she's unique because every woman is unique but she's not the first female hunter.  We got to see her in Dark Secret when she showed up to help Colby and we were introduced to the De La Cruz brothers.

But then I remember that I read the other books before this one so he wouldn't know about the others yet.  I gotta remember I'm ahead in the reading order. I loved that we got a bit of a reunion in this one and got to see the families as they get to know one another.  There are more pieces of the over arcing mystery that is unfolding for them. as everyone is beginning to see that this isn't just the vampires banding together but them getting help from someone just as powerful and just as motivated to see the Carpathians come to an end.

I truly feel for her because she has been corrupted even more than Aiden's girl I was. We saw somewhat of the corruption in Dark Destiny with Nik's lifemate having been tagged, and we now know that the Society has been using science along with vampire magic to make themselves even  more nefarious, but it's in Dark Demon that the whole story starts to come together, we meet several new characters, we explore more of the ice world, we learn much of history of the peoples, and of Natalya's time and when you read the other books and look back at this one you see how much she is loved, because someone makes the ultimate sacrifice so that she and another may live.

As I've said I've already read ahead in the books and already know more about the 'mystery' than they do, so I know how it's being worked out, but it was good to get the tiny story pieces I was missing, A few things that I didn't understand from later books are explained and we see the beginning of some new relationships and see the ground work of the next books being set.

This is where we begin to return to the caves we saw in Dark Descent, we see the caves and learn more about history of the Carpathians and the Mages, we also see the beginning of the war and what led to the different races becoming what they are in later books.  Natalya came from a long line of the Carpathians the Dragonseekers and she is also part Mage, she is unaware of her true connection because she has run from all of them, it's the only way she's managed to stay alive.

I really enjoyed the way Vikirnoff and Natalya came together, she was witty, funny and sarcastic, she never once forgot that she was a full woman herself and not just Vik's lifemate.  She refused to leave Vik in the caves as she loved to put it, she was great at talking to him and getting him to I really loved the buildup as the story went along.  The one thing I didn't like was Natalya's refusal to think that perhaps there was more to the story of her brother, but when you considered what happened to her and all the things that have been done to her, you can see the struggle to not want to see her twin as the monster the others have seen him as.

Vik was as funny as his brother kept saying. He was a really good guy and he saw way more than others gave him credit for and I loved that he was so in love with Nat.

This is a really good story, especially because I read the stories of the bothers back to back.  Another great addition to the series.  Perhaps even the best one yet.

Happy Reading and of course can't wait to get to the next one.