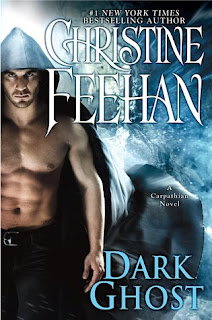 
In the new novel by the #1 New York Times bestselling “queen of paranormal romance,” (J.R. Ward) a wounded warrior and a woman on the run find salvation, passion and unimaginable danger in the ghostly darkness of the Carpathian Mountains… He wasn’t civilized or tame. He had his own code and he lived by it. Monk. Bounty hunter. Vampire slayer. Andre Boroi has spent centuries battling the undead, holding out against the dark with honor. But now, gravely wounded by master vampire Costin Popescu, Andre will be easy to track—his spilled blood marking the killing trail for Popescu and his hungry band of underlings. Andre’s only chance is to disappear into the gray mist of the Carpathians. To wait. To hope. She had a healing touch and a scent that was his lifeblood. In the mountains in search of a precious crystal, geologist Teagan Joanes suddenly finds herself hunted by those she once trusted. Then she comes across the warrior—wounded, wanting and irresistible. Andre has been craving her for an eternity: his lifemate. Her warmth envelops him. Her scent pulsates. And with every beat of her heart, Teagan surrenders to a passion she can’t possibly comprehend. Now they are bound by destiny, but is it enough to keep them safe from a stalking, relentless darkness that threatens to swallow them alive?

I can't begin to explain how disappointed I am, I expected so much more from this book than I got.  It took way longer to read than it should have considering it's only 312 pages, and considering the novella that comes before this is 216 pages and that's in a smaller cheaper book I'm not amused that this is a hardcover and cost almost 27 dollars. Nope not amused at all.

So this book is following Teagan who is supposed to be a biracial American girl in the Carpathian mountains with a guy she considers a friend. They are old college buddies and it's not until they get deep into the mountains that his love to murder women comes out. Yeah she's so screwed but she's got a head on her shoulders and fights back and get out.  She's got an amazing gift and in her hurry to hide from her stalker finds a cave covered in a spell that she unravels and takes refuge in and it's there she makes the discovery of a lifetime.

As the story builds we are repeatedly told over and over again so much about her family that I get the feeling this book is really a filler or an explanation for the book coming in the future.  We are also told she's going to be the hope of the men in the hidden in the monastery and yet we aren't given any indication of what the 'hope ' she can give the men is.

Teagan doesn't feel like an African American at all, she doesn't use any colloquialism or any old sayings that a woman who is raised by her grandmother would use, she doesn't have any of the reactions that an American should be having to seeing a vampire for the first time, and just beyond that she's almost a cardboard cut out and that's just disappointing.  I was so annoyed by the biting of the lip thing that kept being mentioned over and over and over and over again  it just became too repetitive and annoying.  To me it felt like Christine had heard that the biting of the lip thing was big in fifty shades of grey and decided that was something she should throw in her books. It's so annoying.

This books should've have been a novella instead of a hardcover novel because it's really just a filler book which sole purpose was to expand the world of the Carpathians and introduce us to the monks in the monastery.  Having read the synopsis for the other book I get the feeling one of these men going to be the man courting Gabrielle or even be the man who meets the Grandmother.

We learnt a lot about her grandmother and her family and you have to wonder if she got his talent from her mother or her mysterious father, was he really Razvan like in Colby's case?? Or was it something from her mother's side of the family, things that should have mattered where not discussed but stupid things I didn't care about got repeated over and over again, like her fearsome glare that she uses on her in laws and her rowdy nephew. Like what?? Why??

Yeah I found myself almost not wanting to continue the book because yeah no not feeling it. but I'm finished and I'm now completely caught up and that's one book goal for the year complete. Yayy

★★★☆☆
I'm not sure I could recommend this one, I would say only if you have read the series then you can add it on, but don't let this one be your first read.  Happy Reading