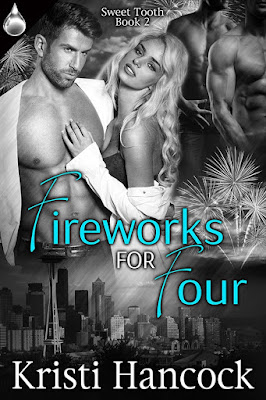 
Kick the new year off with a bang!

With few friends and no support from family, ballerina-in-training Caroline Holder pays her bills by working as a nude model. Her financial survival depends on it.

Craig Bishop is a workaholic who achieves his goals because of his tunnel vision when it comes to the things he’s passionate about, which has only been his work—until now. When he sees the beautiful model in body paint at his annual New Year’s Eve Party, it’s love at first sight. Irrepressible feelings for the stranger disrupt his autopilot relationship with his girlfriend, leaving him with the untenable choice of dumping her on the holiday or hiding the most powerful emotional response he’s ever known. Not to mention the new object of his affections has caught the eye of his two friends as well. As he grapples with his own growing desire for the nameless model and her surprising desire to be shared, a Dominant side he never knew he had emerges.

Caroline prides herself on her professionalism, including not talking to clients. She can live out her ultimate sexual fantasy, but only if she breaks the rules. Is one night with three sexy strangers worth the risk?

This is a quick steamy novella, that went places I wasn't expecting it to.  Caroline has given up a lot to achieve her dream of being a ballerina, but while she works on that dream she's making the ends meet by being a moving piece of art at parties and functions.

It's New Year's Eve and she's a moving statue at a company party and while figuring out her spacing for a new routine, meets and speaks to the client which is apparently a big no-no. Sparks fly and Caroline runs off before she and Craig can exchange names.  Craig can't get the gorgeous woman out his mind, and makes some serious decisions based on that brief encounter, mainly he's on a mission to learn her name and to get to know the woman he's so attracted to.  However he's not the only one to spot her, two of his best friends have seen her and now have her in their sights; with time running out until her contract with him runs out, how can Craig get to her when she isn't allowed to talk, and can he get to her before his friends??

Caroline meets several more men at the function that draw her eye and when one of them proposes an outrageous suggestions, she has the chance to indulge for one night without consequences in her deepest darkest fantasies, if only she's brave enough to take the leap.

I loved that we got to explore with Caroline how she should approach the moment or even if she should approach the moment. I really enjoyed reading the down and dirty and steamy parts of the story and how even though it's a small book, it manages to convey such emotion and eroticism.  It was an interesting read, because a few of the twists that happened weren't expected so they kept me intrigues to see how It would unfold.  I loved seeing the embracing of changes and the curiosity in which everyone approached the evening.