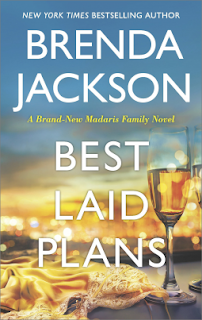 
Love wasn’t supposed to be a part of the deal…

Even a famed matchmaker like Nolan Madaris’s great-grandmother can’t get it right every time. Nolan, the notorious fun-loving ladies’ man, could never connect with someone as straitlaced as tech whiz Ivy Chapman. Yet the scheme Ivy proposes is tempting—they can pretend to be a couple, just long enough to satisfy their families.

But someone forgot to clue in their hearts

What happens, though, when Ivy’s plan to get her relatives off her back has an unexpected side effect: getting her into Nolan’s bed? Houston’s number one womanizer may have found the only one who can truly satisfy him, body and soul. But with a man from Ivy’s past determined to be part of her future, both she and Nolan will have to decide what’s fake, what’s real and what’s worth fighting for…

Y'all are used to me saying when it's a fave author I don't even read the synopsis, I one click and keep it moving. and when I got approved I did a happy dance.  This one isn't part of the Westmoreland Clan it's one of her other series the Madaris family saga and I'm just as in love with it.  This one is a great romantic story filled with comedy, hints of suspense,  meddling elders and children who think they can outsmart them at their game.

I really enjoyed this one because it felt like coming home and being enveloped in with family. I really enjoyed how the story unfolded, how much these two tried their best to beat their elders at their matchmaking plans and inadvertently ended up right where they were supposed to.  I loved that they were both headstrong individuals who were successful in so many aspects of their lives but this one. I absolutely loved their Elders; they were determined to get these two together and they knew they couldn't just introduce them, they had to meddle as much as possible.

Ivy is super successful, she created her own company because she knew she wouldn't fit in with corporate deadlines & politics. She created a firm that was successful based on her love for computers and while it might not make her the most popular person it does fulfill her. She has her best friend and her Grandmother, who needs more??  Nolan for his part grew up a nerd surrounded by a loving and supportive family with his Great Grandmother as the Matriarch, she pushed all her kids to be successful, to find love and make their community better.  When she sees that Nolan isn't getting past her last relationship she decides to step in. Nolan was the nerd that went from Urkel to Stephan, he embraced the success that came with that change and when he realizes his Great Gran as about to but in he launched a plan to make himself extremely unattractive to women he doesn't believe is right for him.

From sending them letters and notes from each other to rigging events to get them together these older women were not to be deterred.  Having been in relationships that ended poorly Nolan & Ivy were determined to find their own happiness without their Grandmother's and Great Gran's intervention.  Making a plan to beat the two older women at their matchmaking they tried at first to fight fire with fire then they simply made it appear that they were giving in. Within this dance of deception comes the past bring with it danger and trouble and without the friends that Ivy has made can her heart survive??

I do have one bone to pick with this story, and that is with Nolan's choice of women to aide him in his subterfuge. I know he states it was a good option but for me it makes me give him the side eye other than that I loved this story so much, I laughed and commiserated with Ivy & Nolan. I loved their exploration of their feelings, I loved how Ivy confronted Nolan when she was uncertain and how Nolan reacted when he realized the plan was working a little better than he expected.  Their chemistry was off the wall and I loved all the moments of them exploring these moments as well.

I totally understood being cornered by those you love and feeling like you can't get out of it without hurting their feelings.  I loved the glimpse of the expanse of the Madaris family and definitely need to catch up on this series.  There were so many different family members introduced, with only small glimpses of their stories. I can't wait to see just where the series goes because she has introduced the next generation already and it should be interesting to see how they succeed.