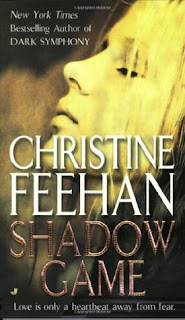 
The classified experiment is the brainchild of renowned scientist Peter Whitney and his brilliant daughter, Lily. Created to enhance the psychic abilities of an elite squadron, it can transform their natural mental powers into a unique military weapon. But something goes wrong. In the isolated underground labs, the men have been dying-victims of bizarre accidents. Captain Ryland Miller knows he is next. When Dr. Whitney himself is murdered, Ryland has only one person left to trust: the beautiful Lily. Possessed of an uncanny sixth sense herself, Lily shares Ryland's every new fear, every betrayal, every growing suspicion, and every passionate beat of the heart. Together, they will be drawn deeper into the labyrinth of her father's past and closer to a secret that someone would kill to keep hidden.

For me, this is a re-read so I can launch into the rest of the series. I read this years ago when t first came out and surprisingly there was so much of the story that I still remembered. This is the story of a young woman discovering that the man she has known and loved her whole life is a flawed and immoral human being.  He's a scientist who has taken his desire to know more too far and so many people have paid the price for his knowledge.

Perhaps because I've read Lora Leigh's series this one was a little underwhelming when it came to their powers.  In reading this it's still good but not as action packed as I expected.  The first book is laying the groundwork for the rest of the series, we meet several of the men who agreed to the experiment and we get several mysteries that begin to unravel as the story progresses. We are thrust into political and military intrigue along with the desire to save the men all while acting as if we have no idea what is truly going on, which incidentally Dr. Whitney (the daughter) truly doesn't know.

As we are reading we realize that the good Dr. Whitney has played God more than once in his attempt to learn about the human brain and how to enhance it, in doing so he creates several different units of men and women who a left struggling to understand this new world. And still, he has no answers as to how the brain works. O_o bruh?!!! I was absorbed into the story, I did want more action, however, we were getting all the science of the how and the to whom Dr. Whitney did this to. We learned all about the crew Lily and Ryland rescue, we even see what happens when it goes completely wrong.  I do have to say I really love how the characters were written, especially Dr. Lily Whitney.  Unlike most of the female heroines from some of her other series, this one was the smartest person in the room, and she also wasn't street stupid. Like, she knew how to play the game and even why she had to play it, and I love that.

Christine can write the heck out of some scenes and the description of her home and how it's aided her is just so beautiful.  I loved how she used the terrain as part of their weaponry arsenal and even made the home both comforting and a bit fo a citadel itself.  I really liked the foundation she is laying down for the series and I can't wait to see some of the secondary characters that we got glimpses of seeking out and find their mates as well.

I really loved the conversations the team had as well as Lily and Ryland. I loved how she would go off into the science and he would bring her back around to talking in a way everyone could understand.  I liked their chemistry and the way they acknowledged the passage of time yet still found a way towards each other. Unlike most of the other stories Christine normally writes this time the action and the groundwork took precedence to the relationship and I really loved that. Not to say that when they got together it wasn't fireworks and everything awesome.

I'm going to enjoy diving into the second book because I remember that one fondly and can't wait to get to it.