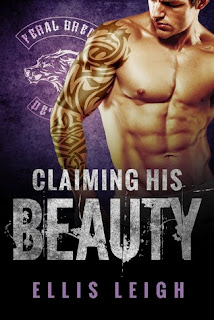 
A shifter living a life hindered by regret… A woman praying for a chance at a future…
A moment of fate that refuses to be denied.

Beast of the Feral Breed has spent years avoiding interacting with people. Other than the two shifters he considers family, his life has revolved around the engines he loves to work on, the ink he decorates his body with, and the scars of a past he wishes he could forget. When a witch shows him a vision of his future—one with a family he knows he can never have—his solitary life implodes, and he embarks on a trip that drops him exactly where he doesn’t think he should be.

Calla wants to escape the hell she’s living, but between her low-paying job and the danger lurking in the woods, running alone isn’t an option. Desperate, she spends her time praying for someone to help free her from a life she fears will be cut short. The human woman never realized the dangers of dating a wolf shifter…until he showed his claws.

When Beast falls into Calla’s life, he’s more than a little surprised to meet his mate—a woman he knows he should walk away from. But danger hovers around every corner, and Beast refuses to leave her vulnerable. Protecting one human woman wouldn’t be a challenge, but Beast has to battle his past mistakes, stay under the radar of the local pack, and rescue two people he never expected to love. One of whom has yet to take her first breath.

Full-length novel with adult content featuring a scarred wolf shifter with a brutal past, a woman in more trouble than she can handle, and some time spent in the shower.

This is a re-read for me and somehow until I was fully immersed into the book I didn't remember reading it. Oops.  I looked up my notes and realized I read it in 2016 right around the time I read a really terrible piece of work that put me into a slump so yeah no wonder I don't remember it.  I went into this one looking for a bit of a beauty and the beast retelling and that's not what I got, I got a really good paranormal romance that I really enjoyed.

This story is about Beast who one night is given the gift of sight that shows him his life mate and what he sees makes him believe he won't be able to be with her so he decides to run, and in the process runs right to the woman he was trying to get away from.  Calla made the mistake of falling in love with a man who began to show his horrible colors once she was stuck there.  Now she's got no way to leave and there is another who needs her to be brave, and then Beast comes along and gives her hope, but is he who she can trust??

I really enjoyed the characters especially Calla because despite the reasons she should be afraid she embraces the changes in her life. She has doubts but she still pushes forward.  I enjoyed reading their story of how they danced around what they wanted but at the same time tried to face it because of the new danger to them and their relationship.  Bastian was an amazing character because when he thought he was doomed he still made sure that his mate was taken care of, I would feel my heartstring pull each time he made an observation that was breaking his own heart. I got mad when he did & laughed when he found some joy at the moment.  I really enjoyed them together because they desperately needed a little glimpse of happy and they were it for each other.

As this is the fourth book in a series a few of the characters were quickly glossed over, we were introduced to them and only snippet descriptions were given. I believe the author did this because she believed only someone who has read the other books would be this deep into the series, and normally she would be right.   This story is interesting enough that I want to go back and read the others as well.

I truly loved the author's ability to pull you into the story.  I identified with the scene that took place in the diner, as they saw each other for the first time and yet it was as if they had known each other forever.  It felt so genuine and unique to how we act when you meet someone who makes you feel so good.

Although the ending was kind of predictable, I mean they are soul mates fated for each other; there are a few twists that make this a story you want to continue with. There are other wolves that need to be taken care of, I need to know about Shadow and the other sisters who used to be Beasts roommates.

I really enjoyed so many parts of this book but the ending scene with Beast and Calla was especially sweet. That moment he has with his brother made me laugh so much.