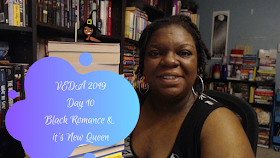 I had some thoughts about that new Jasmine Guillory article from  ZORA.  I wasn't the only one; so many on twitter also had opinions that they shared and it spawned a bit of a recommendation thread all over the place. With yesterday also being National Book Lover's day it didn't go down well that this young woman and her team seem intent on erasing black women writers from the romance sphere.

It's not the first article that has tried to frame black romance as something that hasn't existed until Jasmine came along and really it's on the authors of the article to do better research. It is also on Jasmine and her team who have final say that an article shouldn't erase the works of the women who came before her to center her as "shero of black romance". We don't have to live like this, we don't have to pit black romance authors against each other, there is plenty of room at the table that many of the African American authors had to build for themselves since big publishing houses didn't seem to believe they would have selling power. Many of the names we know as staples did sign with big houses but they also self-published and created their own publishing imprints as a way to get the stories they wanted out there, not just the ones the gatekeepers would sign up for.

Imprints like Arabesque, Kimani and Dafina having been publishing African American centered stories for decades and for this little author of 4 books to come along and act as if Sandra Kitt hasn't existed and been making movies from her works for years is absolutely bullshyt.  We could sit here and go through the history of African American authors who have created different lanes for all of us to read in, from the women who when they realized big publishing houses weren't going to create the books they wanted to create their own like the 'street lit' sub-genre  of romance that focuses in on the inner city and impoverished men and women seeking love/ revenge and sex; because everyone's stories deserved to be heard.  Several publishing houses including Triple Crown Publishing by Vickie Stringer came out of that so did many well-known authors Omar Tyree, Sistah Souljah and more.

Romance in all its nuances has existed since dime novels were considered salacious in the 18th and 19th century.  Black romance has been shaped by greats like Sandra Kitt, Beverly Jenkins, Donna Hill, Brenda Jackson, Francis Ray, Rochelle Alers, Terry McMillian, Toni Morrison and so many more.  These women have been putting pen to paper and writing about black love, black romance, and it's many varied outcomes. They have staying power as many have extensive catalogs and have been writing in this genre for decades.

It's disheartening to see this article and this moniker being thrown around without the consideration for the women and men who changed the genre to include people who look like them. From E Lynn Harris writing about on the down-low brothers to Kimberla Lawson Roby's books about Reverend Curtis Black, and the shenanigans that take place in the black church, to the historical novels that center black women post Civil War written by Beverly Jenkins. And not to mention all the Christian Romance novels out there, the paranormal like those written by LA Banks (May She Rest in Power); and the smorgasbord of contemporary and interracial romance authors out there.  From Ace writers to the erotica like Robin Covington and Zane.

I personally have grown up in this genre, I started by reading a Nora Roberts novel my aunt gave me and then I found Sandra Kitt and I haven't ever looked back.  In high school I was reading Omar Tyree books and discussing them with my classmates, as a sheltered teen, I knew nothing about street life but these books made me feel seen as a kid growing up in the city. I remember sharing the Coldest Winter Ever with my girlfriends from my freshman year in college. My sophomore year I loaned out my Omar Tyree collection to a cousin and never got them back, but I remember reading and loving so many of the works that I had to replace them. I still to this day remember how I reacted to a twist in Milk in My Coffee, like still a shocker.  His book Leslie was so good and I was hooked.

The first time I read a Beverly Jenkins book and realized she was sharing real history?? That she had bibliographies in the back that I could use to go down the rabbit hole of black history??? I was hooked. Seeing Disappearing Acts by Terry McMillian then discovering it was a book?? How Stella got her groove back?? Seeing a black woman on Oprah talking about Jamaica and she wasn't Jamaican?? Loving the heck out of the adaptation with Angela Bassett?? ( I mean that romance imploded but still we got some good books and television out of it). Black women have always been the ones to center our stories, our pain, our history and our journeys. Lynn Emery writing of black women heiresses trying to make it in the corporate world.

Don't come in here and piss on all of us and tell us it's raining. To be a Queen includes more than being the flavor of the moment. It's staying power, it's having a range in the books you can write, with different characters and their journeys. We all know they will end up together but how they get there is what makes a great writer. Give me the emotions, don't just waltz in here and pretend that because you say it it's true.

I state it in my video and I want to touch on it even more here. Not only is it erasure of the black women and men who have opened up the genre for her to be able to come in and make these damn comments, it's also a way to center stories, not about black women at all. It feels like the way her press is being handled that black readers aren't the target audience, we are the 'given', they seem to believe we are already going to be reading her works because she's a black romance writer. UGH no, that's not how that works. The interviews and the way she's being marketed which include ignoring the presence of the black women who have been around before her is a total white gaze marketing. It appears (to me the reader) like she's not really marketing her books for us black readers but for white readers who want a little 'flavor/ color/ sassiness' in their romance without having to actually read 'black romance'.

Now again I understand that this is just my perception, but as someone who buys romance books, and I like to believe have a little sway in what others read as well, then you would want to make sure we aren't the ones you are slighting. I have no dog in this fight I'm not a writer, aspiring or otherwise, I like working in the healthcare field but romance is my escape, and seeing women who have helped me without even knowing it being treated like chopped liver, pissed me all the way off. So here I am participating in the callout. Fix the way your press is shaping your campaign as a writer, stop erasing black writers who have helped to shape the genre you get to come in and write in.

Jasmine you and your team need to do better.

Share in the comments down below your recommendations for romance readers my loves and let's continue the discussion.
As always
Happy Reading