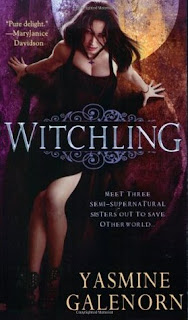 
We're the D'Artigo Sisters: Half-human, half-Faerie, we're savvy--and sexy--operatives for the Otherworld Intelligence Agency. But our mixed-blood heritage short-circuits our talents at all the wrong times. My sister Delilah shapeshifts into a tabby cat whenever she's stressed. Menolly's a vampire who's still trying to get the hang of being undead. And me? I'm Camille--a wicked-good witch. Except my magic is as unpredictable as the weather, which my enemies are about to find out the hard way...

At the Wayfarer Inn, a portal to Otherworld and the local hangout for humans and beasties alike, our fellow operative, Jocko, has been murdered. Every clue points to Shadow Wing, the soul-munching, badass leader of the Subterranean Realms. He's made it clear that he aims to raze humankind to the ground, turning both Earth and Otherworld into his private playground. Our assignment: keep Shadow Wing and his minions from creeping into Earth via the Wayfarer. The demons figure they're in like Flynn. After all, with only my bumbling sisters and me standing in the way, how can they miss? But we've got a secret for them: Faulty wiring or not, nobody kicks ass like the D'Artigo girls. . .

Overall:
I listened to this over the course of two weeks, not because it wasn't good but because I enjoyed it then put it down for a few books for tour dates, I found that it was extremely easy to jump back in when I wanted to come back to the story and the narrator Cassandra was wonderful, her voice able to keep you entertained and engaged while keeping the story flowing.

Narrator
This was narrated by Cassandra Campbell and she was wonderful. She carried all the emotions and made them tangible without bogging down the story. I loved when she managed to make Camille's voice sound like an overall narrator while still sharing the story from her POV and sharing her funny as hell self talk. I enjoyed her voice a good deal.

I loved that this was an urban fantasy. In this world, the Fae and all the creatures of the paranormal world are out and they are all form Otherworld. Camille and her sisters who are all half-fae, half-human were more prepared to live among the human than most. They are guardians who really only have a few instances in which they have to step in. Until the day someone opens the portal to Otherworld and let in three dangerous creatures who immediately set about upsetting the balance of the town.  Something or someone is killing Fae and leaving a mess behind and now the sisters must work with their human liaison and try to find out just what came through and what it's got to do with the coming upheaval in Otherworld.

I loved that this world had so many complex courts and the lore that was included. It's going to be interesting to see all the stories that develop and come out of this world. Camille and her sisters are interesting, as each young woman has different strengths and weaknesses. Camille is the witch in the family but her spells don't always work, she's in love with a race of people that are looked down upon in the Otherworld ( because even in the fantasy world dark-skinned people can't catch a break le sigh). Knowing that the Svartans love to enthrall their lovers then leave them she cuts him from her life first and now that there is an upcoming battle the Svartan is back in her life. Can she trust him or is he here only to break her heart.

Her two sisters will have their own stories as one was changed into a vampire while on assignment and another has a tendency to shapeshift whenever she's stressed. That makes it hard for her to help during battles. As the story grows legends come to life, a long lost key comes into play and there is a hot dragon. Oh and several earth spirits including a drop-dead gorgeous Kitsune.  Camille has to complete a bargain of getting a demon finger, finding the murderer of the Fae, stop a powerful artifact from falling into the wrong hands and take on a seemingly indestructible Fae nicknamed Badass.

She's gotta do all of this while making sure her bookstore doesn't get protested by those who want the right to hunt their paranormal neighbors and of course protect the city.

I did wonder if this was a spin off of a established series, while the world building was good; I felt like a bit of the storytelling was a 'given' like you should know because you've been here before. Also the relationship that Camille is in was done really quickly as they are an established couple from before the story started.  There is also a weird relationship that develops with one of the sisters, and it happened off screen and we don't know how it all went down. The sisters were quirky but I'm hoping it's not too much of the chick lit quirk where they are so 'helpless' without the male protag. I enjoyed this one for the lore we were getting as well as Camille's view on things. She didn't have any too stupid to live moments which let's be real sometimes these books have the heroines do just so they can be rescued. Nope she was smart, and on top of it including being knowledgeable about the lore she needed to be able to save her family and stay one step ahead for now. I'm hoping this shapes up to be a polyamory story but I won't hold my breathe.

I enjoyed it, and can't wait to check out the rest of the series which I now own up to book 18 thanks to Savers over the summer.