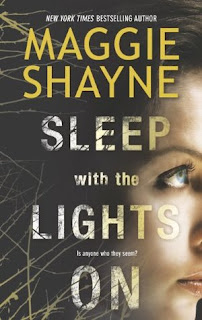 
Through the eyes of a killer...

Rachel de Luca has found incredible success writing self-help books. But her own blindness and the fact that her troubled brother has gone missing have convinced her that positive thinking is nothing but bull.

Her cynicism wavers when a cornea transplant restores her sight. The new eyes seem to give her new life, until they prove too good to be true and she starts seeing terrifying visions of brutal murders - crimes she soon learns are all too real.

Detective Mason Brown's own brother recently died, leaving behind a horrific secret. In atonement, Mason donated his brother's organs, though he's kept the fact quiet. Now he wants to help Rachel find her brother, but when he discovers the shocking connection between her visions and his own brother, he suddenly has to do everything in his power to save her from a predator who is somehow still hunting from beyond the grave.

This is a fantastic start to a new series that kept me engaged right up until the story ended.  The case drew you in and makes you wonder how the story is going to progress overall. All the main characters were well written, I mean we start the story with the serial killer in the process of hiding a body. Right from the get-go we knew the story was going to be wild.  We got to learn the motivation of all the characters as the story progressed and even though I understood why certain characters did what they did a good chunk of the shyt happening wouldn't have if they hadn't made the choices they did. Or you could say Fate would have stepped in anyway.  Either way, the story was so good.

I was fascinated by Rachel because she was a woman who was selling the idea of positivity like a drug but she refuses to believe it herself.  And as the story progresses and the changes come, her snark and the way she handles it all?? Just so good. While Rachel is one of my favorites, Mason really makes my heart hurt because I understood his motivations. He so badly wanted to protect his family from the fallout, yet his decision carries with it a lot of repercussions even he couldn't have foreseen. And you just know that somewhere down the line the other shoe is going to drop and when it does?!!! Shrapnel everywhere.  That moment in his apartment, when the instinct to protect overruling everything else?? That's a moment I can totally identify with.

Some of the secondary characters were well written a few were a bit one dimensional. We didn't focus on the outside people too much, just those within the case. I'm hoping as the series progresses we get more from them especially his partner. I haven't read a thriller in a while so having the book start with the POV of the killer?? Listen I was so hooked like my gawd this man is a trainwreck; which even he had to acknowledge and yet he couldn't stop.  When we go from him to Rachel and she's so normal that it's jarring to realize how far gone the killer is. As we progress we get Mason's side as well and between the three we get one hell of a story, as each character shares more from their perspective that enhances the story and I was just hooked.  Sadly as with any of these books, the plot was way too believable especially because serial killers seem to abound on the ID channel. It was all too real from Mason's choices and actions to what the killers did (even if their motivations didn't always add up).

As a first book in the series, it established really well how Mason and Rachel become a team and why it was necessary; while laying the groundwork for the other books to come.  The central case was the killer being identified (and that was easy, as we the reader knew who it was from the beginning, but the rest?? yeah that took a while) but how do you stop a killer who is supposed to be dead?? How do you accept the knowledge you now have?? How do you undo your mistake?? How do you protect the innocent without there being fallout for everyone?? While we knew the killer would have to be apprehended the ending was still very suspenseful and unpredictable. At least I didn't see all the twists that were coming but they didn't feel too far out from the plot so yeah, I was addicted to the very end.

I gotta say as a person who will eventually have to have the surgery Rachel had, I liked that Maggie didn't try to go too hard on the medical information but shared just enough so you knew what was happening. ( Also this is my wheelhouse and I hate when authors don't get it right, just share just enough to be believable but not enough for me to get annoyed when you get it crazy wrong).  My favorite scene is when post-surgery Rachel kinda freaks out but still tries to be 'strong' while quietly losing it on the inside. I also loved whenever Rachel talked because she constantly challenges Mason but at the same time is learning about herself now as a sighted woman.  Her snarky side has to be one of the reasons I love her, the other reasons are her family, she had an amazing relationship with her sister which I could totally relate to.

There are so many good moments in the book that made me marathon read it. I am however forever and always going to side-eye Mason for his choice, I mean I understand as there isn't anything I also wouldn't do for family, but being who is?? Way too many of his real-life counterparts make those choices and they aren't always for the altruistic reasons he did it.

I also liked (even though normally I wouldn't) that this was a slow burn romance, the story focuses more on the development of the case and the characters the romance takes a backseat (as it should as we are trying to survive here) and yet it still flavored their interactions and when they finally give in??? Awesome!! Must read the next ones immediately!!

Have you read this series my loves?? Or can you recommend a few more like this??
Happy Reading my loves,