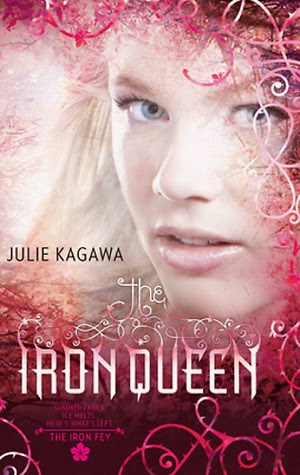 
My name is Meghan Chase. I thought it was over. That my time with the fey, the impossible choices I had to make, the sacrifices of those I loved, was behind me. But a storm is approaching, an army of Iron fey that will drag me back, kicking and screaming. Drag me away from the banished prince who's sworn to stand by my side. Drag me into the core of conflict so powerful, I'm not sure anyone can survive it. This time, there will be no turning back.

OMG  I totally love this series.  U just.. WOW. So beautifully written, I even teared up a few times (they didn't fall just a little moisture in the eye..maybe 1 lone thug tear fell..maybe).  I loved seeing Meghan's growth, her maturity, yes, she had her moments but umm she's only 18, I kept forgetting until she reminded us, Holy crap. I think I would have had a full on melt down with half the crap going on in her life.

I totally knew it from certain clues we were given who exactly the false king was and I was right,  How she didn't see it I'll never understand also the packrats were a huge clue that something was up.  And the ending.. oh gawds can we talk about the ending.  My heart just broke into a million little pieces, just broke.

I'm stunned, thrown for a loop, hurt and afraid to read the next once because can it do the story justice??  Ash's vow just made me love him even more, and broke my heart, all while making a lone thug tear flow.  Ironhorse was an amazing character and he was right.  I do have a bone to pick with Julie though, in describing Ironhorse she called him a monstrous black man (when you read it you'll know what I mean), yeah no other character was called monstrous why the Black guy?? Everyone else was discussed in terms of their beauty. There were so many other words that could have been used like massive, gigantic, humongous, heck you could have even said "Hella big" if you wanted to get down liek that but monstrous though?? Le Sigh Julie Le Sigh. I'm giving you the side eye from hell Julie. From. HELL O_o