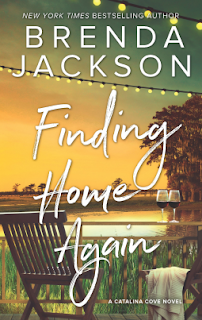 
First love. Second chances. In Catalina Cove, anything can happen…
Bryce Witherspoon’s heart races every time she sees Kaegan Chambray. Everyone in town knows they can’t stand each other, but the truth is, even though the man broke her heart ten years ago, she still feels that irresistible, oh-so-familiar jolt of desire.

When Kaegan returned to Catalina Cove to run the family business, he knew there’d be no avoiding Bryce. The woman he thought he’d one day marry was instead the biggest heartbreak of his life. But when Bryce lets slip a devastating secret, he discovers just how wrong he was to let her go all those years ago.

He knows they both still feel the spark between them, but it’ll take more than attraction to convince her. Kaegan will pull out all the stops to show Bryce he’s the man who can give her the future they once dreamed of—if only they give love a second chance.

ahhhhh I'm so excited this is the third book ( and hopefully not the final) in the Catalina Cove series and we are going to finally learn just why these two have been angry with each other for ten years.  And what a story it was. A second chance romance with a bit of a mystery that makes the couple face their issues and finally admit what they truly feel for each other.

Kaegan, Bryce & Vashit have been best friends since childhood. Kaegan's father didn't believe in education and had kept his son from school, once Bryce's mom found out she pushed the community to get him to go to school and realizing he couldn't hold out against them the old man grudgingly sent his son to school but in doing so Kaegan was two years behind. From the first KGee, nicknamed that because Bryce couldn't say his name, was friends with the girls as the older kids ignored him and the others didn't engage. He's been their protector and friend for as long as they all can remember.

While Vashti was sent away during her pregnancy, Kaegan and Bryce leaned on each other and their friendship bloomed into love. And as with all young lovers untested by life believed that their high school romance would go smoothly into an adult romance. But life and some of the towns' people couldn't leave well enough alone and the young lovers split based on a misunderstanding that bloomed into a bitter fight.

And that fight and bitterness have defined their relationship for the past ten years. After drifting apart Kaegan moved away & Bryce moved on and became a successful business owner. Still angry with each other they have taken every opportunity to swipe at each other since KGee moved back home to Catalina Cove. Their bitter battle has placed Vashti in an awkward position because she knows more about the story from each of them than they know and she keeps trying to get them in the same area so they can air it all out.  This tragedy finally comes to a head and they both hurt each other again before separating, finally, Bryce breaks and tells her truth to Kaegan and he's left realizing his actions were based on lies.  He's devasted but determined to make it up to her and win her back. Also, I could understand his POV especially with all the misinformation he had been receiving, and the events of that night; Bryce acting as if she can't understand why he was angry doesn't fly. Girl reverse it, you would have lost it and wouldn't have believed him either.

This is a sweet second chance romance, where the couple now have to not only learn about each other as adults but learn to forgive each other for the mistakes they made as their younger selves.  It's hard to fight through the past while trying to hang onto the good memories; they both help and hinder them. Kaegan starts a campaign to gain her forgiveness and Bryce is afraid to trust again. Add to this he decided to win her back when she's decided to move on completely, she's trying to find someone who can replace the way Kaegan made her feel and she starts dating. As they try to move on, they just keep hurting each other and I wanted them to just get therapy cause y'all need to work through everything.

I really loved the strength of the friendships in this one, as they were the best sounding boards for both of them as they tried to find their ways back home to each other. Bryce has to learn to trust again and since this man has shown that he can break her heart this is a little harder to do than one would think. I loved that it wasn't an easy journey back to each other, as this means they will appreciate the love more.

However, while they are trying to make their way back to each other, someone has decided to wage a campaign against Kaegan, there are several incidents with each escalating in severity and then the ending happened.  Listen ok, I was yelling at the book no no no no don't go, call someone, send a text something anything. it was like watching a horror flick and commenting the whole time. I loved it.

This story flew and I loved that there was tension not only within the relationship but without as well, this kept me engaged and the story flowing well. Giving the characters time to develop and share with us their true motivations. I loved that we had several small stories within as well. We get to see Vashti and Sawyer's family and their progression. We learn what happened to the budding romance between the girl's grandparents while catching up on Ray & Ashley and their growing relationship.

I loved visiting this town again and hope it grows. I would love to see what happens to Jade in a few years.