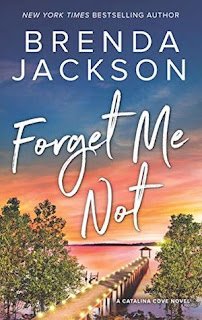 
Brenda Jackson welcomes you back to Catalina Cove, where love is waiting to be reclaimed...

Ashley Ryan never doubted that her husband, Devon, was the love of her life. Even now, three years after Devon died in a car wreck while on a business trip, Ashley can't bring herself to move on. But when her girlfriends surprise her with a getaway to beautiful Catalina Cove, Louisiana, she gets the shock of her life when she encounters a man-bearded, more rugged than before, but unmistakably her Devon.

Ray Sullivan moved to this quiet coastal town after waking up in a hospital with amnesia. Haunted by a life he can't remember, he's built walls around his heart and a quiet life running boat tours-a life that includes no recollection of Ashley, a woman he suddenly finds himself irresistibly drawn to.

Doctors warn Ashley of the danger in forcing her husband to remember the past. Though she longs to tell him the truth, she finds herself falling all over again for a man she knows may never truly come back to her. In this place where healing and second chances are just a heartbeat away, can love take root once more? (

Overall:
This is the second book by this narrator and I love it. Ron manages to make each character wonderful and unique. I absolutely loved his accents for each and how he helped to convey the emotions each character was feeling. I highly recommend him as a narrator and of course Brenda's work is phenomenal as well.   It's ten hours and I listened to it at 1.5X speed and finished this one pretty quickly as well.

Ron Butler is fantastic, Great melodic voice that conveys all the emotions of each scene without being overly dramatic. I loved the way he was able to use inflection and tone to convey seriousness of  different situations and at the same time convey the humor of a moment. I really found myself loving the story more because Ron was sharing it with me.

This is a second chance romance for a couple  where one doesn't realize he was a part of the couple. On the way home after a successful business trip, Devon Ryan has a moment of being a good Samaritan and because no good deed goes unpunished he ends up brutally beaten and left for dead. He's found and rescued but he was in a coma for a few weeks, during that time his family is informed that he has been killed. This sets off a series of events that lead us here, Devon wakes up but has amnesia ( I know soap opera levels here, but it's done extremely well, so just rock with me for a moment) and because unbeknownst to him his family already believe him to be deceased they have no reason to be searching for him, once they are unable to establish his identity the government give him one and he become Ray Sullivan.

Ashley is Devon's wife and when the police come to tell her that her husband passed away it devastated her. It's been three years and she still hasn't recovered, her mother however believes it's time she has moved on and has commenced shoving 'suitable' men on her. Being her best friends and sympathetic to her feelings, they gift her with a two week break from her mother and her manipulations; it's a two week stay in beautiful Catalina Cove, she's going to be staying in Vashti's renovated Bed and Breakfast.

Once she's there enjoying the scenes Ashley has an incident and she believes she hears her husbands voice. Ray Sullivan steps in to save her and when he goes with her to the hospital he can't understand why he feels protective about this particular woman. In the three years he's lived in this town he's refused to date a woman because he believes he's married but because he can't remember he refuses to put himself in that position. This is the first woman to make him challenge this decision.

The story unfolds and Ashley requires the help of the two best friends and Vashti to help her win her husband back. How many of us have the chance to not just fall in love with our soulmate but do it twice?? There are so many moments that make Ashley wonder if she's doing the right thing, as she wonders what will happen if his memories of her never return?? Can she love this new man who inhabits her husband's body?? Can she love Ray who is totally different from Devon?? Can she let go of the memory of Devon long enough to give Ray a true chance?? Or will the memories of her past love stop her from learning if this man could be her next love.

I really loved how the story came together. Even if her mama got on my last nerves. I enjoyed that Ashley created a safe haven for herself with her friends and had people she could rely on, who loved her unconditionally. I loved the small town feel f the story and I can't wait to what's going on with the final bachelor in their friend group. This story flowed so well and I was hooked to finding out how it all would end. I really felt my anxiety go through the roof in those final chapters as the truth came out and we get the big reveal.

I highly recommend the story and of course the narrator.  I normally say that I love romance because you go into it knowing there's going to be a HEA, but I have to say with this one I wasn't certain because she kept repeating to herself the statistics and boy I knew it was a good story but I feared for them a few times. You know it's a good romance when you know the ending but are addicted to seeing how the journey gets them there.

Real World moments intruding here: I would hate to be in their shoes when they have to deal with the insurance about him being declared deceased and here he is alive. That's going to be a tangled web to unravel. Then there are all his debts and accounts, getting back his license. Just the headache from thinking about it. My gawds ok moving on now. Enjoy the story my loves!!!