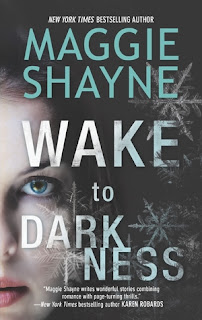 
Stranded with a murderer...

Rachel de Luca's uncanny sense of perception is the key to her success as a self-help celebrity. Even before she regained her sight, she had a gift for seeing people's most carefully hidden secrets. But the secret she shares with Detective Mason Brown is one she has promised to keep. As for Mason, he sees Rachel more clearly than she'd like to admit...

After a single night of adrenaline-fueled passion, they have agreed to keep their distance—until a string of murders brings them together again. Mason thinks that he can protect everyone he loves, including Rachel, by taking them to a winter hideaway, but danger follows them up the mountain.

As guests disappear from the snowbound resort, the race to find the murderer intensifies. Rachel knows she's a target. Will acknowledging her feelings for Mason destroy her...or save them both and stop a killer?

In an attempt to protect his family from the repercussions of his decision in book one, Mason takes them away to a holiday ski resort. Only the killer has followed them there and a snowstorm has cut them off from getting help or getting out of there. This one had some of my favorite romance & thriller tropes snowbound in a remote area; unknown killer amongst the guests; and secrets are threatened. Yep, it's all in there.  And I flew through this one trying to get to the end and discover just who the killer was.  And I was so satisfied when we got the answer.

Bodies start turning up with grisly details and once Mason realizes what the connections between the victims are he tries to isolate everyone who could possibly be a victim. Only the killer seems to be one step ahead of them and while locked in the resort two new victims turn up.  It's the holidays and the resort is fully booked, how can Mason discover who the killer is without alarming the other guests?? Even though everyone was told not to share the information with anyone, someone did because there are new faces amongst the guests.  Once again Mason's decision from book one comes back to haunt him, and now he's scrambling to determine who could be cleaning up his mess from before. What is the motivation for this new killer??

Once confined to the resort, Mason starts to see the cracks in the facade of his family, his nephews aren't doing as well as he thought especially his oldest nephew who has taken to different ways to cope with the pain of his father's loss.  His sister in law doesn't appear to be doing so well either and isn't handling the loss of her husband and the difficulty she's having with her son too well. Mason has to juggle all of this while dealing with his difficult mother, and his relationship with Rachel and of course find out who is killing all these people before Rachel becomes the next victim.

As the story progresses and the youngest nephew gets on everyone's last nerve (including mine) little secrets get revealed; Rachel & Mason confront their feelings and they work towards unraveling the mystery. The story had a good balance between the whodunit and the romance. We really focused in on the whodunit as the mystery built and had a few red herrings as well. I certainly didn't peg the killer until the end a well.  I love stories like that because I'm looking back at the other scenes and going OMG that's what that meant or so that's why?? Yeah totally worked for me.  Mason's decision coming back to bite him the ass is just perfect. I know I shouldn't revel in it because I understand why he did it and I know the fallout would have been really rough, but now he's getting a glimpse of how deep this one goes and who else will get hit when it eventually does come out.

We got some more about his best friend/ partner and his partner's wife but considering this is supposed to be his best friend not as much as I was hoping. The story progresses quickly and once the crazy starts flying we don't stop until the killer is caught. There are so many moments when the secret almost tumbles out and you see how others begin to react and you just know it would have been worse before. Now Mason has to decide how to move forward with his family and Rachel. Rachel has to decide how to handle being in a relationship with Mason, adjust to having these visions and having her sight back as well. All without letting the world know she is a bigger cynic than they would believe.  And yes she's still gotta celebrate the holiday as well.

This story managed to bring you in and kept you hooked until the full reveal, and even then it's not as cut and dried as you would have believed.  Again we understand why they are doing what they did and the circumstances leading to it. I mean they are wrong but still, you can see what lead to their conclusion.