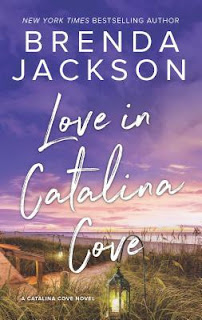 
In her brand-new series, Brenda Jackson welcomes you to Catalina Cove, where even the biggest heartbreaks can be healed...

In the wake of a devastating teen pregnancy that left her childless and heartbroken, Vashti Alcindor left Catalina Cove, Louisiana, with no plans to return. Now, over a decade later, Vashti reluctantly finds herself back in her hometown after inheriting her aunt's B and B. Her homecoming gets off to a rocky start when the new sheriff, Sawyer Grisham, pulls her over for speeding, and things go downhill from there.

The B and B, a place she'd always found refuge in when it seemed like the whole world was against her, has fallen into disrepair. When a surprising benefactor encourages Vashti to reopen the B and B, Vashti embraces a fresh start, and soon old hurts begin to fade as she makes new memories with the town and its handsome sheriff. But some pasts are too big to escape, and when a bombshell of a secret changes everything she thought was true, Vashti is left reeling. With Sawyer and his teenage daughter determined to see her through the storm, though, she's learning family isn't always a matter of blood sometimes it's a matter of heart.

Overall
I hadn't tried to read a romance novel as an audiobook before. I decided to give it one chapter and if I couldn't do it then I could go back to reading the book in physical form. I'm so glad I gave it a chance.

My reason for hesitating has nothing to do with being a snob about reading in different formats. I have no problem using the format for non-fiction titles.  I've mentioned before that I have a disease which means eventually I will go blind and then audiobooks will be my only choice; for me I have been holding off on adopting the format because starting to use it felt like giving in. Yeah Yeah Yeah I know it's stupid don't give me those looks, I'm well aware that I'm coping poorly, just give me the time I'm working on it.

Narrator
Anywhoo, back to the review, I got so sucked into this one that the 13 hours flew by. I also listened to this at 1.5X speed and that cut the reading time down from the full 13 hours. I started this on a Saturday while cleaning and I can tell where previously I couldn't get into the story (any fiction story on audiobook) this one, I was drawn right in and got lost in the story, I believe a good chunk of that had to do with the narrator's voice. While it's a man reading the story after a while I couldn't even tell that, Ron was able to bring tone, bass, and accent to each character in a way that separated them and made them unique.  I got lost in his voice and I certainly don't want to come out. Ron's voice was melodic and great for the characters, he was able to convey some really good emotions.  And he certainly caught me by surprise several times when the story called for it.

I legit wrote in my notes "wild as F*ck" and honestly that still stands. I wanted to not believe people could do this; then I remember where I volunteer and remember that truth is always stranger than fiction even though it's the first decade into the 2000s people still do the wildest shyt in the name of 'respectability'.  Especially if you add in religion to it.

This story starts off as a chance for this young woman to get a leg up after it appears her marriage has come apart. If she can sell the resort her Aunt left her then she would be able to live her dream life of traveling the world and seeing the places her Aunt had never been able to see. There's just one hitch, she has to return to the town that treated her like a pariah when she needed their support the most and convince them to allow the new changes the prospective buyers are offering the Cove.

Vashti hasn't been home since moving away for college and now she needs to return, sell this property and get out before the memories can get to her. On her way there she gets pulled over for speeding by the new sheriff Sawyer. It appears that even if to her the town hasn't changed at all, it has changed somewhat to have hired a good looking sheriff. And as the story developed we go from Vashti having a plan and a way to execute it, to the hands of fate stepping in and finding a way for her to confront the past, while giving her a chance at future happiness. After the sale falls through Vashti decides to still sell the property, runs back to NYC only for her life there to fully fall apart, then comes a visit from someone she would have never expected from and she's given a new lease on life if only she's willing to return to the Cove.

I absolutely loved the development of the story, and even though I didn't expect some of the turns it was going to when we got to certain parts and we began seeing the reactions of people I started to get hella suspicious.  Whew chile, some people are truly trash and I don't care what anyone says you don't have to forgive anyone, The story was shared partially from the POV of Vashti who has several reasons to despise the town and it's treatment of her; she also has some serious heartbreak to deal with before she can give Sawyer the fair chance he deserves.

Sawyer for his part has convinced himself that since his wife has passed away, he's going to invest in his daughter and raise her, then he'll think about having a life.  I absolutely loved that his daughter wasn't here for that. She was hilarious and a fun character to listen to as she challenged him and pushed him towards happiness. I loved their relationship and that she knew she was loved unconditionally and this allowed her to view the world differently than most.

Once the characters were established the story moved extremely quickly and I loved it. The characters were well developed and I fell in love with them. I needed this story and the love was so good.  I loved that the landscape played such a large part in this story, the town was as much a part of the story as the human characters. And with all Brenda's work, she peppers in some history the enriches the story.  As the story was shared, a few other POVs in the book add depth to the story. I can't wait to see what happened to the two best friends and what their deal is. I also can't wait to read Ray's story.

I loved that the story had amazing friendships and familial relationships, including the found families that the characters created. Vashti's friends are truly some of the best. They gave great support and love even when those who should have didn't. I'm glad I didn't read the synopsis and just went into it. I loved everything about this one.

I highly recommend it, especially in the audiobook format.