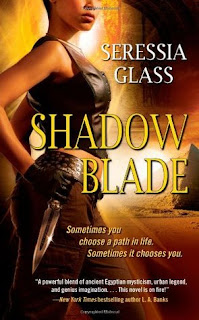 
For Kira Solomon, normal was never an option.

Kira’s day job as an antiquities expert, but her true calling is as a Shadowchaser. Trained from youth to be one of the most lethal Chasers in existence, Kira serves the Gilead Commission dispatching the Fallen who sow discord and chaos. Of course, sometimes Gilead bureaucracy is as much a thorn in her side as anything the Fallen can muster against her. Right now, though, she’s got a bigger problem. Someone is turning the city of Atlanta upside-down in search of a four-millennia-old Egyptian dagger that just happens to have fallen into Kira’s hands.

Then there’s Khefar, the dagger’s true owner-a near-immortal 4000-year-old Nubian warrior who, Kira has to admit, looks pretty fine for his age. Joining forces is the only way to keep the weapon safe from the sinister Shadow force, but now Kira is in deep with someone who holds more secrets than she does, the one person who knows just how treacherous this fight is. Because every step closer to destroying the enemy is a step closer to losing herself to Shadow forever. . . .

I absolutely fell in love with this series and it all started with this one. Told from the perspective of Kira Solomon a trained Egyptologist who has an extra sense, when she touches things she can learn it's entire history. Kira is a trained Shadowchaser, whose job it is to help the Light battle Shadow and keep objects of power from causing trouble among the mundane world.  I had picked this book up due to it being blurbed by LA Banks (one of my all-time favorite authors), and to know she liked it meant it would be right up my alley. It's a book featuring black women kicking ass, taking names, being the heroine and also with powers. Other than LA Banks I hadn't read a book that included all of this and I'm so glad I finally got to the series.

There are plenty of books on the market featuring women who have a sacred duty to help keep the balance between Light and Shadow but I haven't read any that used the Egyptian pantheon as the basis instead of Judeo Christian beliefs; while I love LA Banks for her inclusive series even hers relied on Christianity as it's main basis for the battle of "good vs bad" . This has no Judeo Christian beliefs at all, it's all West African, Egyptian, and Nubian lore, myths, and pantheon.

There are so many great reasons to love the story, let's start with some amazing characters including a West African God, it took me a few pages to figure out who he was and when I did I loved it. He became one of my favorite characters throughout the book (and the series).  Kira is also one of my favorites because, despite all the reasons she should collapse beneath the weight of her burden, she refuses to, and she's having a bit of fun while doing it. Then we get introduced to the Immortal Warrior and he is just everything awesome. I mean the reason he's nearly indestructible sucks and how he came to have his powers isn't a great thing but this helps to make him a great helpmate and team member for Kira.

This is a fantastic start of a new series that includes the groundwork without dumping the information. makes characters relatable while being different enough to make the story engaging.  The world-building, the writing, the plot were all five stars for me. From the very beginning, I was hooked into knowing all about Kira and her abilities and how they would impact her world and her work.  Secondary characters were well fleshed out and engaging enough that you wanted to know more about them as well. I laughed so hard once I figured out who the older gentleman was, I kept picturing him as he is portrayed in American Gods the show. The Nubian/ Immortal Warrior was an interesting and intriguing character, just to know he had witnessed all of that history and those civilizations come and go. I can't wait to find out more about him.

While the story of Kira's struggle to find acceptance with her powers while never being able to get or give a hug ( like oh my gawd that must be so hard). it's her job as a Shadowchaser that brings trouble to her doors. Facing the different shadows and their minions is one thing, taking on the big bad that she has to?? Considering almost no one ever survives?? Fighting the urge to take a blade that is sentient and wants a new master?? The changing of her gifts and her understanding of them?? All while trying to navigate basic human interactions with friends. While there is the potential for a love match this is a slow burn and the battle and the cases take up a good chunk of the story, while the budding romance weaves between without distracting from the main plot. I who normally would hate a story without romance blatantly being all up and through it ABSOLUTELY LOVED IT.

The action kept flowing; the battles were waged and the lines between Shadow and Light are being re-drawn, where will Kira land when it does?? I loved every second of the journey of reading this and ended up marathoning the rest of the series as well. I highly recommend it my loves,