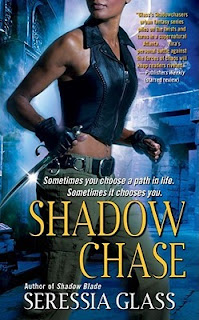 
In a job like this, one mistake can cost you everything.

As a Shadowchaser, Kira Solomon has been trained to serve the Light, dispatch the Fallen, and prevent the spread of chaos. It’s a deadly job, and Kira knows the horror of spilling innocent blood. But now she has a new role, as the Hand of Ma’at, the Egyptian Goddess of Truth and Order, and an assignment that might just redeem her.

A fellow Shadowchaser has gone missing, and so has a unique artifact imbued with astonishing magic. Unless the Vessel of Nun is returned, it will cause destruction beyond anything the modern world has seen. Kira’s got a team at her back, including Khefar, a near-immortal Nubian warrior who’s already died for her once. But as complicated as her feelings for him are, they’re nothing compared to the difficulties of the task she faces.And the only way to defeat the enemy is to trust in a power she can barely control, and put her life—and her soul—on the line.

As with the first book we have well written, well rounded and relatable characters, who we are getting to know even better as the story progresses.  Kira in this one truly becomes my favorite character as she struggles with her desire for skin to skin contact; love/affection and yet not really knowing how to handle it when it appears she has it  This time though we don't really have a chance to express our emotions because we have so many things that need to be done, going back to London to handle the business of a mentor and making sure that the London office is ready to pick up and handle things without them. However, on the way there Kira learns that the London chaser and his handler are missing and so is a significant artifact.

I really loved that it picked up right after the events of the previous books and gave us a bit more about Kira while advancing her new relationship with her friends, her 'mother/mentor' and the Nubian.  Again we get Mr. Nancee who helps to make the story feel lighter than it is when the scenes get a little dark, all while imparting information that we need.  Kira finds herself having to set aside her grief to aide a chaser who is really too new to be out on his own and his missing handler, when she realizes just how badly the chaser and his handler have messed up she has to step in to stop the situation from going from a minor hiccup into a major disaster. Now that she's been named the Hand of Ma'at and her powers are growing, Kira has no choice to follow through on what the Goddess has shown her is her new path.

There are so many heart-wrenching moments within his one, as Kira learns more about her new talents, her history, her mentors and about the case she's working her entire idea of who and what she is, is being challenged. She's trying to solve the case, help the chaser, work with the Nubian and fight Shadow.  Shadow isn't held back by the qualms that hold Kira up so they decide to go full force at the team, and this is a battle that even though they have been ready for, they still couldn't predict how it would go.

I loved this one so much, while it advanced the overall story of Kira and the Shadow world we still got an awesome case to solve, a chaser to help and an artifact to rescue. I loved the balance that was given to each item, allowing the case to help the overall story while setting up more of the world and the magic system without seeming to dump the information in our hands. This case takes us all over the place with some serious adventures and battles thrown in. While we are advancing the story Kira is getting hit from all sides as they battle to flip her from Light to Shadow heats up.

I loved it so much and finished this one in a day because I needed to know what was happening, why it was happening and just everything I needed to know. This one didn't disappoint the pacing was wonderful, the blend of case and the building of a romance was fantastic and of course, we learned more about Khefar and his mission here. I know this sounds a little silly but I absolutely loved that in this book Kira talks about taking care of her braids, there is a scene with her and Khefar doing each other's hair and I just.... I can't even explain what it means to read that. Just hit me in the feels.

I loved the adventure and the romance, it was so good. Go read it for yourselves!!! Highly recommend.