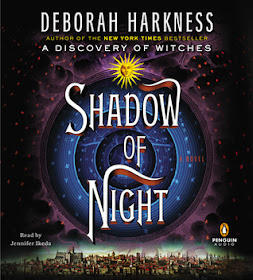 
Picking up from A Discovery of Witches’ cliffhanger ending, Shadow of Night takes Diana and Matthew on a trip through time to Elizabethan London, where they are plunged into a world of spies, magic, and a coterie of Matthew’s old friends, the School of Night. As the search for Ashmole 782 deepens and Diana seeks out a witch to tutor her in magic, the net of Matthew’s past tightens around them, and they embark on a very different—and vastly more dangerous—journey.

Overall:
A great historical fiction that picked right up where the first book finished. The story was chuck full of historical figures as well as with historical facts.  I enjoyed seeing how she wove all the different threads of the characters and the time period together along with the future storylines.

Narrator: Jennifer Ikeda.
This is my first taste of Jennifer as a narrator and she is phenomenal. She manages to make the whole cast of characters unique and carry the story along without losing any of the different threads.  I loved how I could tell who the different characters were, including when she would switch languages and sing. Just amazing, she really brought the story alive.  Her voice was pleasing and her inflections really made the story fly by. I read at 1.5x speed and this helped to make the storytime go by faster. Even sped up Jenn's voice really hooked you. I didn't want to stop listening at all.

Story:
The story picks up right where the first book A Discovery of Witches  ended. I have to say for me this reading experience was phenomenal. Having seen the t.v. show (Review) and reading the book I have a clear picture of the two characters and even as it's lengthy due to including all the historical information it still flowed well and kept me hooked.  Seeing the characters as the people portrayed in the show helped to make this an easier book to digest as we get scant descriptions of the characters at times.

The narrator really was able to make this story flow and the characters come alive. From the get go we really got Diana's thoughts and motivations and I was totally excited with her about being back in history and her realizing it's one thing to read about history/ teach it and it's people it's another to interact with it. I loved the discussion of time and it's movements, as we saw the future where the impacts they were making and the changes being wrought because of them being in the past and at the same time we realize this had to happen for them to come together in the future.

I loved the interaction with historical characters and how the development of how they impacted Dianna and Matthew's life. It was interesting to see how and who knew about the existence of beings and how this created the world we live in now.

When reading the first book I kept saying how much Matthew was holding back from Diana and how that was going to come back to hurt her. And here in this story it really began to come out how much Matthew holds back from sharing with Diana & his family. It's especially telling when family members point out that Matthew has two moods and neither of them allow him to share with those around him. For him this was a journey about learning how his faith wasn't being truly enacted and how much his holding back hurts those around him. Diana for her part had to learn to blend the two halves of herself, the part that hadn't interacted with magic before but wants to learn everything and the part that still wanted nothing to do with magic, while here she was able to be free to be herself to be surrounded by those who knew and were accepting of magic, while trying to stay one step ahead of the beginning of the witch trials in Scotland.

I really loved the life they created while in the time period, the changes it brings to them as characters, the growth they both experience, and the knowledge of how this world works. I loved the little snippets of things that you know have to have an impact in the future then jumping to the future and seeing how it impacts the family then. There are so many good moments, especially when Matthew meets up with someone whom he thought he would never see again.  They went in thinking this was going to be a simple mission find the book, learn about her magic and come back but time and magic have their own rules and they begin to learn that when Diana meets a mentor who really brings it all home for them.

Matthew and his origin is told to Diana and they begin the hunt for the book that will tell them the origin of all creatures. I can't wait to see how the story completely unfolds as Diana learns more about herself and her magic, her history and the history of witches.  I highly recommend reading it in audiobook form while following along with the book.  I can't wait to see it all play out in the second season, the way everything is described it's going to be interesting to say the least.