Audiobook #Review: The Book of Life (All Souls Trilogy Book 3) by Deborah Harkness 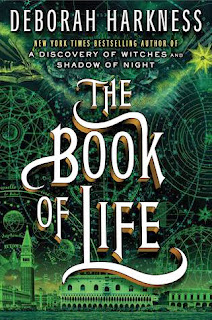 Bringing the magic and suspense of the All Souls Trilogy to a deeply satisfying conclusion, this highly anticipated finale went straight to #1 on the New York Times bestseller list. In The Book of Life, Diana and Matthew time-travel back from Elizabethan London to make a dramatic return to the present—facing new crises and old enemies. At Matthew’s ancestral home, Sept-Tours, they reunite with the beloved cast of characters from A Discovery of Witches—with one significant exception. But the real threat to their future has yet to be revealed, and when it is, the search for Ashmole 782 and its missing pages takes on even more urgency.

Overall:
A fantastic end to the series and I can't wait to see how they adapt this one as well. This eas so explosive and good. I did have a few moments closer to the end where I was annoyed that we essentially got closed door on what I thought would have been major blow out scenes and yet sometimes way too many pages on the mundane.  The pacing was faster this time around and while we had moments of levity, there were a whole lot more unmasking moments within the book. So many things get revealed and I love the way in which Deborah takes the team on their search for the origin of the species. It's going to be hella interesting what they do with the results.  I had originally skipped the novella Time's Convert but apparently, I shouldn't have and after this, I'm going to remedy that, because apparently a good amount of things happened, not enough that you can't follow along but enough you know that things happened off scene and you are missing a few minor pieces.

Narrator:
Jennifer Ikeda.
This is my second story with Jennifer as a narrator and she is phenomenal. She manages to make the whole cast of characters unique and carry the story along without losing any of the different threads.  I loved how I could tell who the different characters were, including when she would switch languages and sing. Just amazing, she really brought the story alive.  Her voice was pleasing and her inflections really made the story fly by. I read at 1.5x speed and this helped to make the storytime go by faster. Even sped up Jenn's voice really hooked you. I didn't want to stop listening at all.

The time has come for Matthew and Diana to return home and bring with them the knowledge of the Book of Life and once again attempt to beat out the others making a play for the book.  There were so many good moments of reunions that Diana and Matthew both needed that brought them healing while giving them the necessary footing to be able to go into battle far more prepared than they were before.

Diana now knows the source of her magic and can control better than before, but she's come back with a few more gifts as well and now the clock is ticking on when and how she will be face the full wrath of the governing body of the species. She's sworn to get revenge for the battles that were waged when she wasn't there and she's coming for the witches who betrayed her and her mother. Before she can make good on that promise though she needs the pieces of the Book Of Life and she and Matthew need to decipher it before their enemies.

From the time they return to the end of the book Diana and her team were running against a clock. Beat their enemies to deciphering the unknown language of the book, get revenge for her mother an all the other witches; find out why the species is dying out, and prevent Matthew's older brother from fling Diana out of the clan. It's a whirlwind of unraveling secrets, learning new secrets and discovering something that will eventually turn their entire world upside down.  There are new mates and partnerships that have formed while Matthew and Diana were away and now that they have returned they have to find their place within the new family dynamics.

I love that we learn what happened to some of the people Diana left behind; people we counted on before come through and some betray us.  Relationships are fractured and the truth comes out in a big way.  I loved the weaving of politics and the mythology of the Knights Templar into the story. The history and as new puzzle pieces were laid I was so excited to see how it changed the landscape they were navigating.  I found myself angry at some characters, in love with others, laughing with Diana and weary with Matthew. The fledging sense of hope, the fear Diana felt as she made it past the loss and her fear about what the future meant for their people. Fighting the ingrained prejudice that many took as a precaution against being seen by humans, it's funny how even within the magical community it comes down to genetics.

I really want to go into more detail but this being the final book I won't spoil it for you. If you want to fangirl on twitter/ Instagram in the DMs then holler at me.

I'm hoping we're going to get more from the world because there are so many we need to learn about. When those final battle scenes were happening?? When they hunted for Matthew and the full-blown truth came out?? This is what happens when a person doesn't truly have faith but uses it to practice punishment. So many times others have pointed out that Matthew's piousness would come back to haunt him and it finally does. I was so hooked those final chapters and I was totally satisfied with the ending. I highly recommend it my loves.