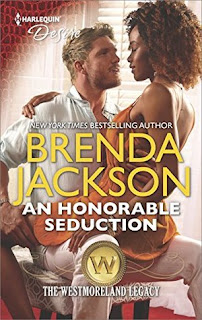 
This Navy SEAL is on a top-secret mission of seduction ...David Holloway is used to hard assignments. Now he faces his most difficult yet: cozying up to the soft curves of Swan Jamison. He wants to know the island beauty ... in every way. But romancing Swan as part of his SEAL team's mission tests his honor, even as his feelings become increasingly real. Soon he must make a choice: duty ... or desire? (

Overall:
A military romance with mystery, intrigue, international espionage and sexy times. Where do I sign up?? Plus it's linked to the Westmoreland family sagas?? Yes, please.

Narrator:
Brian Hutchison. This is the first time I've listened to anything read by him and I enjoyed his narration. The story flowed and he was able to make each character unique enough for a distinction between them and I was hooked because of how he read the story as well. Well done!!

Story:
I grabbed this recently after being at home due to recovering after emergency surgery.  I didn't feel the urge to read but wanted something to keep me occupied while I was stuck in the bed. I decided I didn't want anything with crazy plot lines I wanted some good loving and great family dynamics and I was so glad I snagged this one.

Told using dual perspectives, we have the story of Swan & David. David known as Flipper to his friends is a Navy SEAL who is due for a vacation and is instead given the option for a top-secret mission., this mission is being asked of him by the top brass who he really respects and he decides to take the mission.  Swan owns a boutique in her mother's hometown, where she not only sells unique designs she makes herself but also rents out part of her shop to a successful tattoo parlor. Unbeknownst to Swan, she's being investigated for her part in the selling of US intelligence secrets to the Chinese.

David gets to the island to investigate and is surprised that when he meets Swan in the flesh he's beyond attracted to her. He has to keep this professional not just because her Uncles are his Superior officers, but because he can't afford to be distracted on the mission.

As with all Brenda's books, the chemistry was off the charts and the couple were hilarious together. Both were being cautious, Swan because she had learned the harsh lessons of the past from her parents' marriage and how they were treated by their families. While her parents had a happy marriage after what happens to them Swan has made the choice to never date military and to be extremely cautious about interracial dating.  David is trying to stay focused, finish the mission prove that Swan is innocent and get out of this mission without compromising his honor.

I really loved the story and it kept me intrigued, because not only did we have the mystery of who was selling the secrets if it wasn't Swan. I loved how they talked about what dating would look like and how they went slowly because David recognized that Swan needed the time and space to re-evaluate what was once on her never list. They are so many characters who could have been the ones responsible and some I didn't expect. Once we began to unravel the mystery and more information began to come out I was deeply hooked.

I enjoyed the mystery the romance and the final chapters. I loved how Swan reacted because honestly #Same, and I loved how Flipper got around her fears.

I skipped reading in order like I have been for the rest of the Westmoreland series, so I could read this. I didn't know all the characters David was connected to so I missed that "ahh" aspect when you read a series to the current books. However I still enjoyed the book, it wasn't necessary to know all the background of the characters as there was a brief description when needed. I loved this one especially because Flipper has such good friends. Now I'm going backward to go read those books.