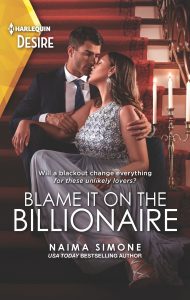 She fell into his arms... now she’s falling for his trap.
Will a blackout change everything for these unlikely lovers?

It was a night filled with secrets, lies…and soul-stealing passion. And now the blackout that turned lowly executive assistant Nadia Jordan and start-up billionaire Grayson Chandler into insatiable lovers leads to a proposal Nadia can’t refuse. As she steps into Grayson’s privileged Chicago world, will his matchmaking mother and vengeful ex destroy her dreams? Or will her fake fiancé make those dreams a reality?

I was super excited to get this one. It's the final installment in the series and I wanted to know how Grayson's story would shake out.  I was so hooked to this story that I was almost late to an appointment and when I left the appointment I sat in the parking lot and read until I finished the book.  I was just so invested it was awesome.

We meet Grayson Chandler, the second son of the great Chandler family in Chicago, who with his best friend Gideon created a company that is making strides in the Tech world is at the same ball with Gideon and is currently trying to outrun his mother's matchmaking and his ex's machinations when he runs into Nadia Jordan, small-town transplant who happens to work for his company; she's at the ball on her day off because her boss an executive in Grayson's company needed a shirt to replace the one he spilled on. While trying to run the errand she runs in the CEO of the company and just when she didn't things could go more awry the lights go down and they are stuck together.  When the lights are out it gives them a chance to drop their masks and not hide. They share details they wouldn't share with others and spend a night of passion they normally wouldn't indulge in.

The characters are well done and even the side characters are as well. I loved that even though the story really focuses on the growing relationship between Nadia and Grayson that their friends and family are seen a bit. I loved the sibling relationships that were shared and that they were loving and even when strained still filled with love.   Both Grayson and Nadia where characters you could root for because they felt so real. When they faced issues they dealt with them realistically, even when it would hurt. I loved that. I loved the chemistry between them, and how even in the moments of passion neither took the other's consent for granted, but in fact enthusiastically sought and given.  Even though both of them bore the scars of betrayal they still without really meaning to seek it in the other, even after they warned each other that this wasn't real. Ugh, that is my jam!! I loved the way the POV went back and forth between them allowing us to see the motivations that they each had and of course progressed the story as some scenes only included one of the characters.

I absolutely love how Naima writes her stories, her characters are well thought out, charismatic and they just flow so well. The chemistry, the realness of the conversations they should be having?!!! Just *chefs kiss* beautiful. I love how strong and yet vulnerable they both are. When Grayson finds himself in a tough spot he backs them into a bit of a corner and even though Nadia knows she's not from the same social stratosphere as the people in her new social circle she refuses to be cowed by it. She doesn't need to be rescued, she's got her own escape plan, but a partner in crime would be nice.

This is a modern romance, with a strong but vulnerable alpha who knows his privilege and power and doesn't abuse it. He, in fact, makes sure those within his employ never take advantage they shouldn't. A strong, vulnerable woman who knows her worth and isn't willing to settle for anything less than what she fully deserves. I loved how the story circled back to sacrifice and how no matter the social status some families require it. And what should sacrifice and happiness look like?? I cracked up because when I was reading I kept saying the "effing patriarchy" because the solution was RIGHT THERE and then, of course, our good guy figured it out!!