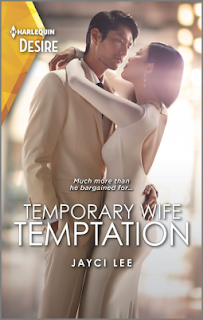 
Harlequin Desire: Be transported to the worlds of oil barons, family dynasties, moguls and celebrities. Get ready for juicy plot twists, delicious sensuality and intriguing scandal.

Much more than he bargained for…

Garrett Song is this close to taking the reins of his family’s LA fashion empire…until the Song matriarch insists he marry her handpicked bride first. To block her matchmaking, he recruits Natalie Sobol to pose as his wife. She needs a fake spouse as badly as he does. But when passion burns down their chaste agreement, the flames could destroy them all…

This is one of my favorite tropes " the fake fiance/spouse" trope and Jayci executed this one well. For a debut author, the chemistry and the push/pull of the relationship is extremely well done.  The chemistry between Natalie and Garrett was off the charts.   Natalie is in a power struggle with an older couple to adopt her niece but being a single woman is working against her. Garrett's Grandmother won't turn over the reins of the family business until he marries the woman she's picked out for him. Garrett doesn't believe in marriage and happily ever after, so he makes a bid to outmatch his Grandmother by saying he already has a fiance.  Natalie works as the HR rep for the LA office of the business Garrett's family runs and when she messes up the chance to have a promotion that would have increased her earning potential as well as allowing her to give the courts a better chance for her to adopt her niece she is willing to take Garrett's proposal. Except she has a crush on him and he finds her irresistible. They make a bargain to keep this platonic except they can't seem to keep their hands off each other.

There are so many good moments within the story, from the moment when Garrett tries to rescue Natalie from his Grandmother and instead interrupts teatime?? I was cracking up. I loved that the fact that they were Korean played a big part in their romance and how their relationship along with the fake relationship was being shaped and shared. I loved that Natalie had a friend that had her back and was willing to teach her what she didn't know as well as help her out when she was feeling overwhelmed.  I enjoyed the way the two interacted and how they worked their way from being wary platonic compatriots to lovers to are we or are we not in a relationship??

After getting married to help accomplish their goals Garrett distances himself and Natalie works on getting her niece since that was her reason for being in this relationship. While they fake it for the cameras and family, the chemistry builds for them and they eventually work to a personal relationship. I really enjoyed Garrett's family as well, his sister seems like an interesting woman and I  can't wait for the developing stories in the series. Garrett has *as all the reluctant protags in these romances do* a few moments where he does the stupidest thing ever that risks the relationship and family. Natalie doesn't make it easy for him and I loved the grand gesture.

This is one of the first times I can personally remember reading a romance featuring two Korean characters and I loved it. I will definitely be adding Jayci into the rotation of must follow authors.