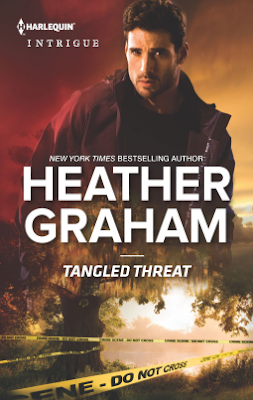 
Some things you can’t forget.

A body hanging from the infamous History Tree unraveled their teenage love. Now Maura Antrim is again tangled up with Brock McGovern. Twelve years later, they’re back where that murder occurred—where Brock had been arrested and then released, where Maura had run, too scared to stand by his side. But with two women missing, and Brock now an FBI agent, Maura is determined to help. Together, they’ll have to confront a threat that never died and see if their passion has withstood the test of time.

Overall:
As much as I love Heather, this was a very "meh" story. It just wasn't for me. I tried reading it as an ARC and wasn't hooked, then snagged a copy of the audio to listen to. While it flowed well, the story had too much history and not enough time spent on creating the tension in plot. There were supposed to be on the hunt for missing women and yet despite saying they were worried almost everyone seemed to just be blase' about it. Even a woman who would fit the description was a total idiot when being told to be careful.  The characters were supposed to be hot and heavy teens with their who lives figured out and when they deal with a tragedy it changes them and yet when they meet up again there is this absolutely no tension about how things were left, no resentment, no anger about how they were treated no hurt, just a easy acceptance without there being any tension one would expect, it just falls in so easy ( like way too easy).

For the first time in a long time with a Heather Graham book I was looking forward to the end and not because I wanted to get to the whole story, nope I just wanted it to end.  This is a second chance romance and I didn't feel like the characters were interesting, and with all the potential the story was boring.  There wasn't much chemistry, they barely talked and I don't know there wasn't any real tension about what her mother had done or how things were handled.  The build up of the locations and the way the history was being talked about I expected way more than we got.

I learned more about Florida's history and frankly very little of what we learned aided in the story. It wasn't until the last ten pages that the tension of the book even manifested. The villains and their motivation were very weak and I honestly just didn't care at the end. Someone can only be so dumb before you want them to be one of the people who goes missing.   The red herring we were giving would have been a better solution than the answer we were given.

When i started following along in the physical book and realized we were over half way through without the two star crossed lovers even really getting anytime alone I knew I was done.  Everyone was acting like him spending one night in jail was supposed to derail his life ( considering he never even saw the judge and no charges were pressed against him, and his family money and influence made sure he never faced any consequences, not sure how that was supposed to happen).  The idea that you loved someone so much that one night makes you turn away from them and neither of you show up to demand answers?? You followed your parents directive and made no attempt to reach out to the other person and then wondered why they didn't follow up???

For a couple that was supposed to be getting back together from a 12 year separation I didn't feel the heat of their relationship. they didn't really have any depth of feeling and While it only took 3 hours to listen to the story I wasn't hooked. When it ended I was like wait what that's it?? Where is the rest?? It felt unfinished.